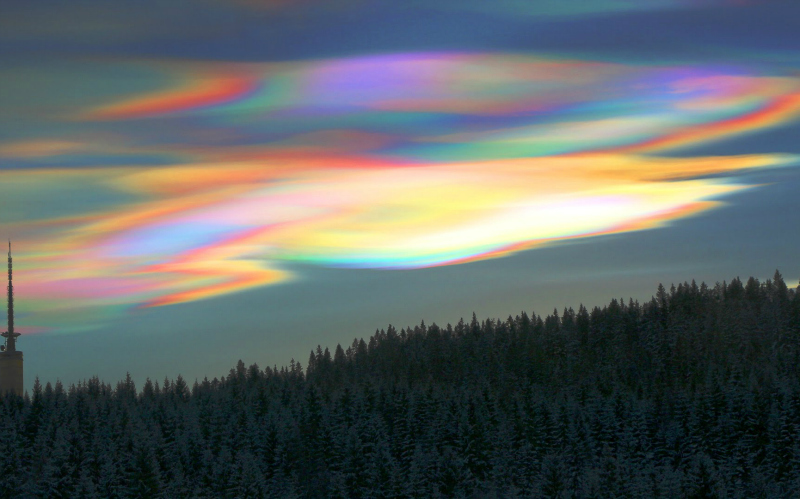 Unfortunately, I have never had the opportunity to observe
them personally. But these are very, very special special clouds.

Nacreous clouds are rare. They have been observed mainly in
Scotland and Scandinavia, but have also been reported from France and Alaska.
Measurements have indicated that the nacreous clouds observed over southern
Norway occured at an altitude between 21 and 30 kilometres (70.000 and 100.000
feet).

Nacreous
clouds are wave clouds and are often found downwind of mountain ranges which
induce gravity waves in the lower stratosphere. Their sheet-like forms slowly
undulate and stretch as the waves evolve. The clouds can also be associated
with very high surface winds which may indicate the presence of, or induce,
winds and waves in the stratosphere. Nacreous clouds resemble Cirrus or almond-shaped
(cousins of theirs!) Altocumulus. They show very marked irisation similar to
that of mother-of-pearl. The most brilliant colours are observed when the sun
is several degrees below the horizon.

They form at temperatures of around minus 85ºC, colder than
average lower stratophere temperatures, and are comprised of ice particles
~10µm across. The iridescent colours of nacreous clouds is due to the ice
crystals being of a uniform shape and size and the cloud cover being thin. The
sun has to be at just the right angle below the horizon to cause differaction
and interference with the crystals to produce these beautiful colours. The clouds
must be composed of similar sized crystals to produce the characteristic bright
iridescent colours by diffraction and interference.

Did you know that these beautiful clouds actually harm the
ozone layer? Pretty incredible but true. Nacreous clouds are a type of Polar
Stratospheric Cloud (PSC). PSC's come in two types.

Nacreous clouds composed of ice crystal with temperature of
~minus 85ºC

Less impressive than nacreous clouds, more diffuse and less
bright colours. Sometimes nacreous clouds are embedden in them. These clouds
are slightly warmer (~minus 78ºC) than the first type of PSC's and are composed
of exotic solids or liquid droplets.

Small spherical droplets of a solution of nitric and
sulphuric acids

PSC's were long regarded as curiosities and of no real
consequence. However, type 2 clouds are now known as sites of harmful
destruction of stratospheric ozone over the Antarctic and Arctic. Their
surfaces act as catalysts which convert more benign forms of man-made chlorine
into active free radicals (e.g. chlorine monoxide). During the return of Spring
sunlight these radicals destroy many ozone molecules in a series of chain
reactions. Cloud formation is doubly harmful because it also removes gaseous
nitric acid from the stratosphere which would otherwise combine with chlorine
monoxide, to form less reactive forms of chlorine. Nacreous clouds help accelerate the process of the depletion of the
ozone layer, without the clouds there is little or no damage. 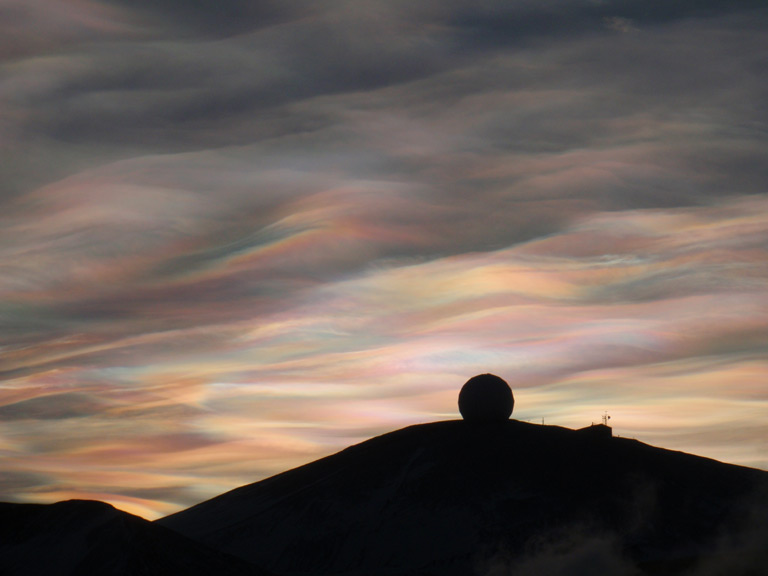 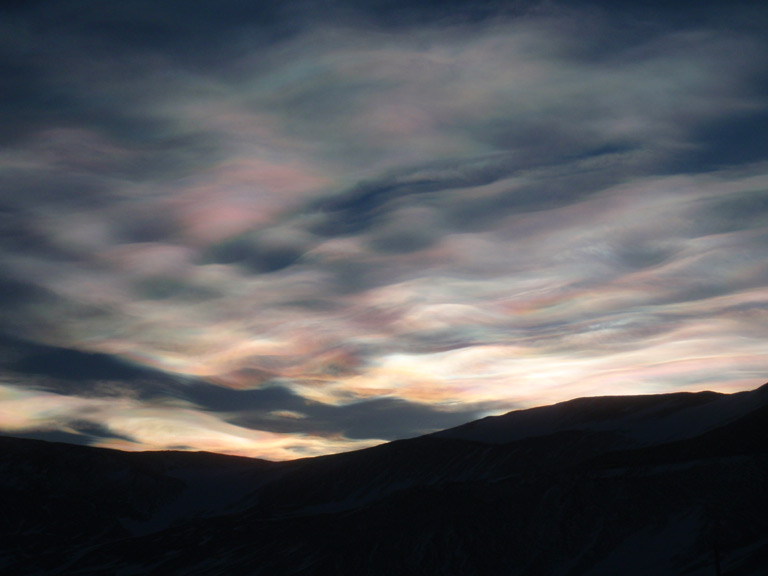 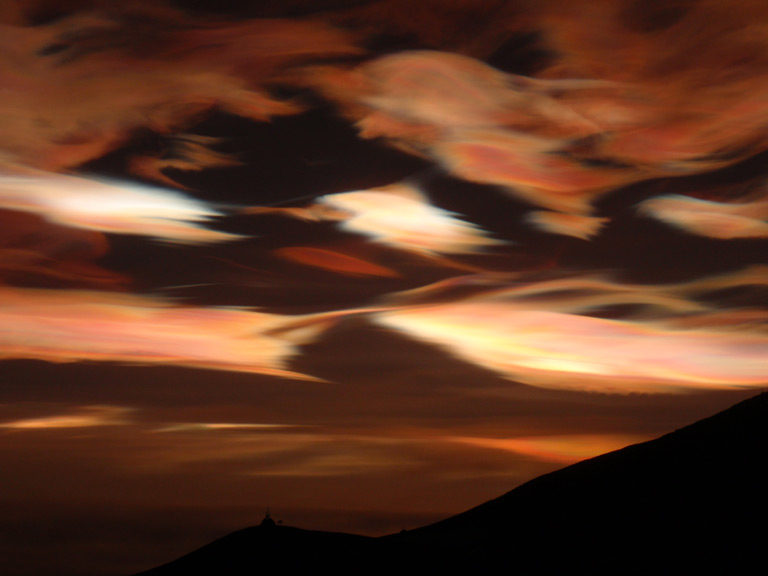 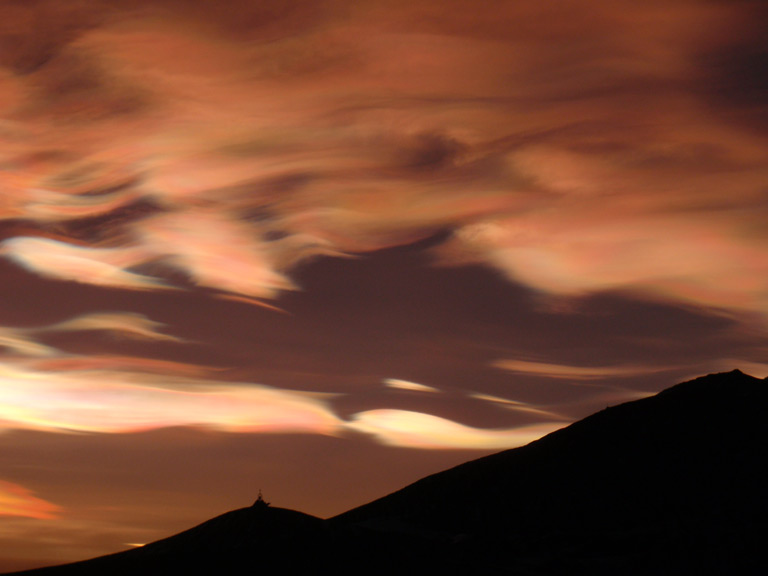 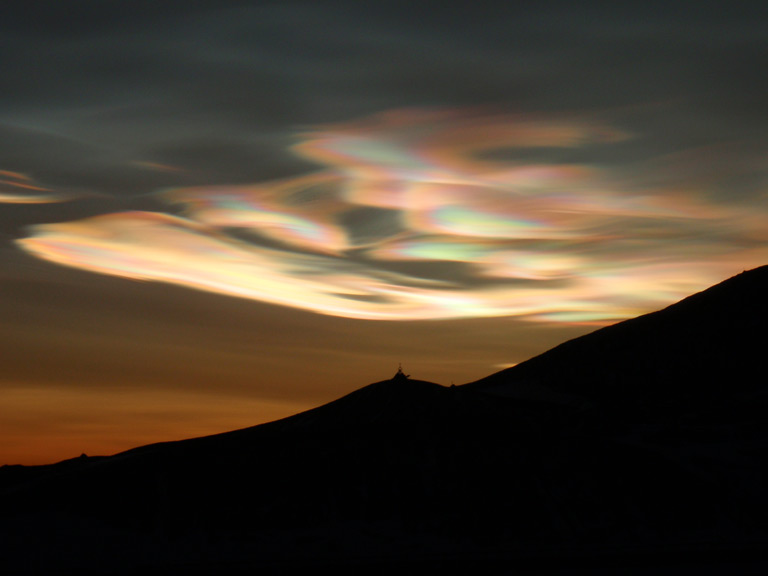 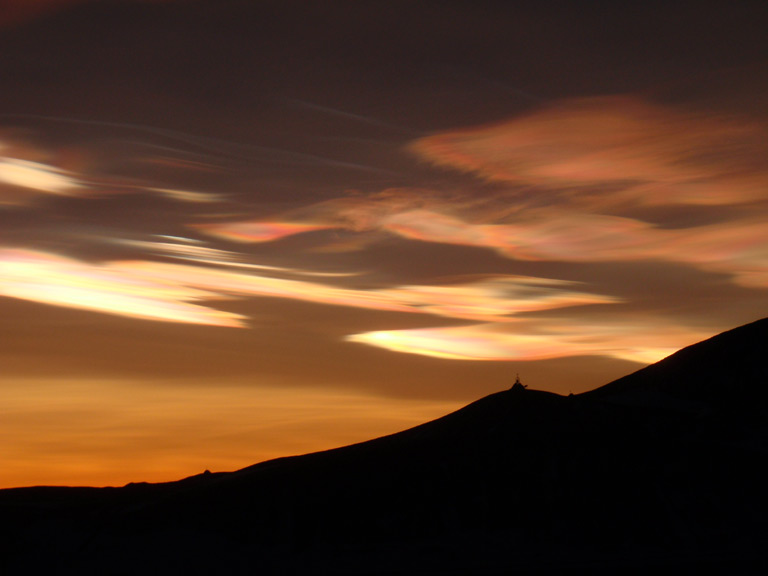 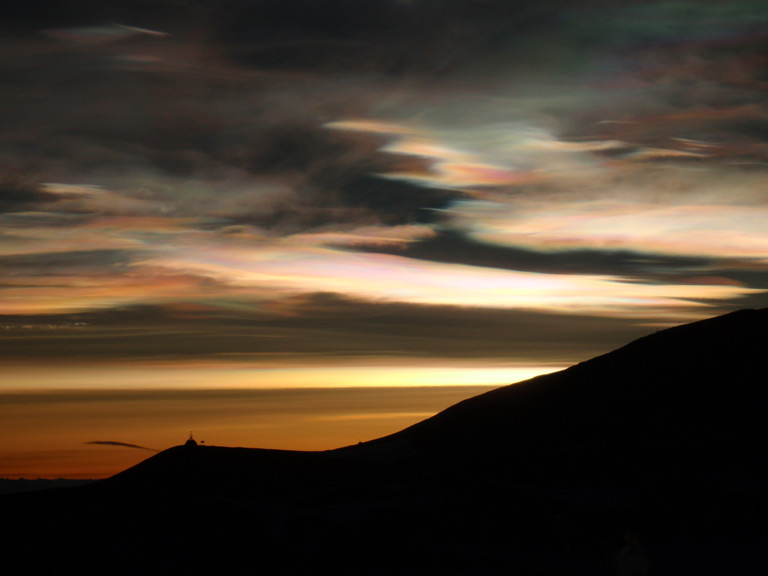 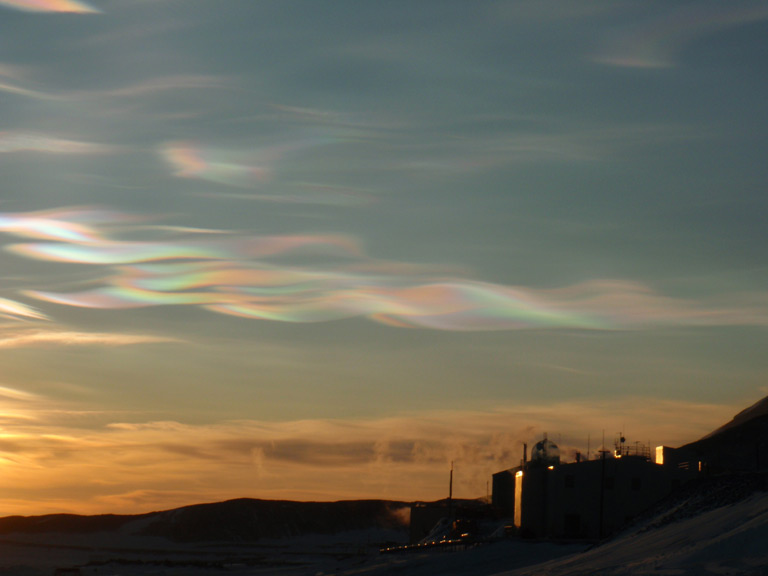 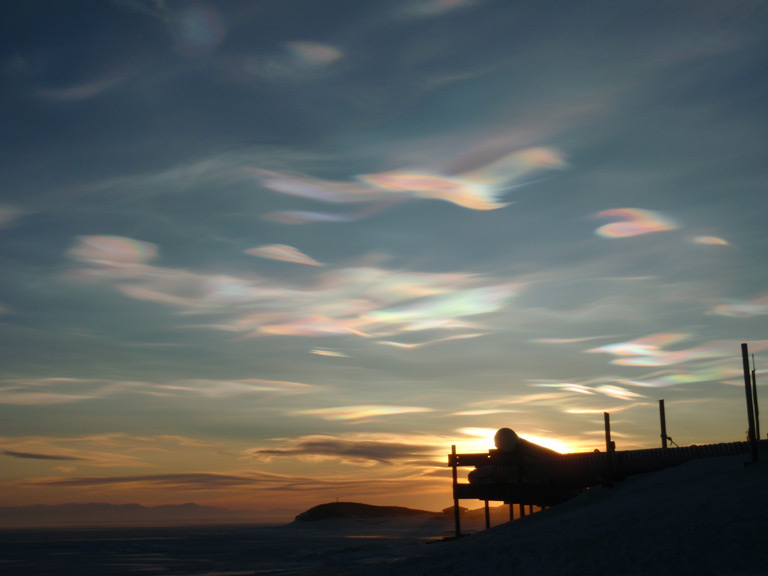 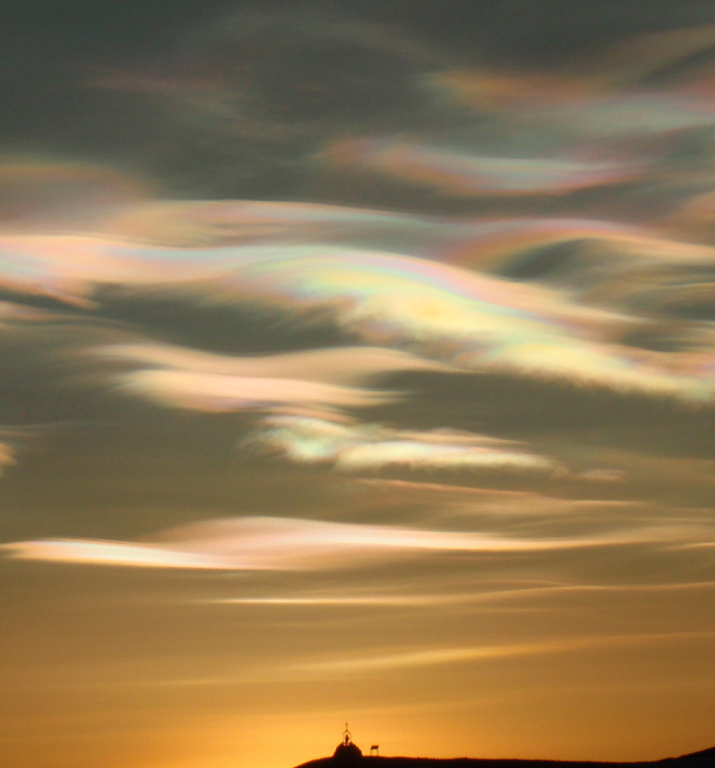 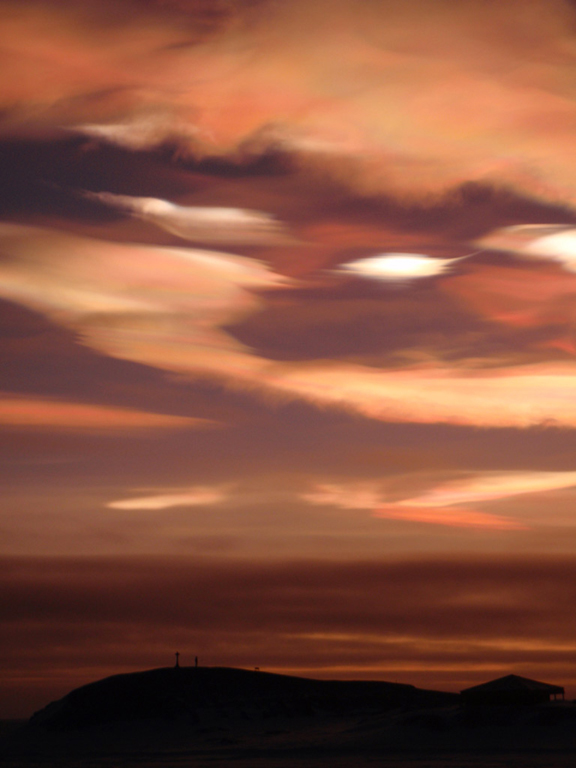 The appearance of a cloud is determined by the nature, sizes, number and distribution in space of its constituent particles. Appearance is best described in terms of dimensions, shape, structure texture, luminance and colour of the cloud.

A classification pf the charcteristic forms of clouds, in terms of “genera”, “species” and “varieties” has been established

The classification is essentially based on 10 main groups, called genera, which are mutually exclusive, that is to say, a given cloud can belong to one genus only. The genera are;
Cirrus
Cirrocumulus
Cirrostratus
Altocumulus
Altostratus
Nimbostratus
Stratocumulus
Stratus
Cumulus
Cumulonimbus

Obsever peculiarities in the shape of clouds and differences in their internal structure have led to the subdivision of most of the cloud genera into species.